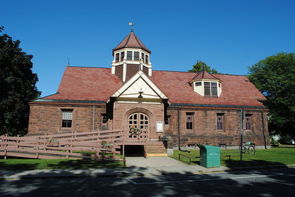 In 1869, Samuel, the son of Payson Williston, and a group of notable citizens of the town, officially incorporated The Public Library Association of Easthampton and a financial appropriation was received from the town. In 1871 the Association was authorized to form and maintain a museum in concert with the library.

10 years later the library had outgrown its quarters in the Town Hall. Emily Williston, widow of the late Samuel Williston, responded with a major gift of $16,000 to construct a new library. The building was designed by Boston architects Peabody and Stearns. On February 23, 1881 the building was opened to the public.

Two major renovations have been done since then. The first in 1930 when the basement was renovated to provide space for a Youth Department and to update the heating system. The second was in 1966 with the expansion of the Youth Department, modernization of the adult section, and the creation of a staff work space. The first computer was purchased for library use in 1988.

The Library building was placed on the National Register of Historic Places in 1987. On the Library Association’s 125th anniversary, the Library was renamed the Emily Williston Memorial Library and Museum. Fine out more by visiting their site by clicking HERE or by clicking the picture of the library.
Western Massachusetts Web Guide
The Western Massachusetts Web Guide is meant to help you increase your productivity and usefulness of a web site that you own or are working on with helpful tips on the process of developing new applications for your website.
Powered by